Decision to Retry Case Rests with Next DA 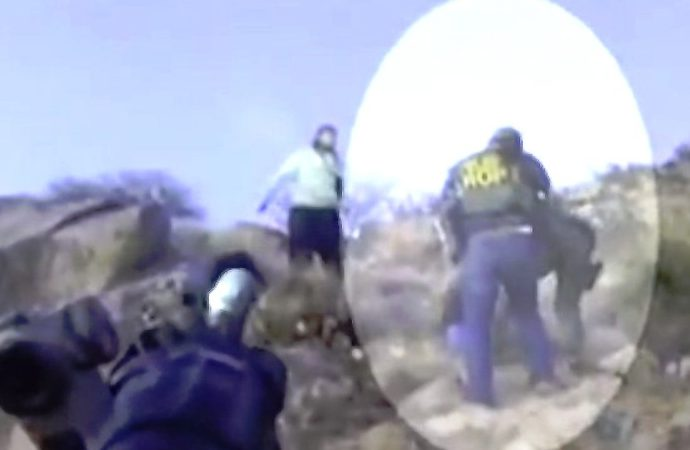 Albuquerque learned how hard it is to convict police of murder, despite video evidence showing two Albuquerque police officers gunning down a homeless camper that many – including a jury foreman – believed was trying to surrender.

Bernalillo District Judge Alisa Hadfield declared a mistrial in the second-degree trial of Keith Sandy and Dominique Perez on Oct. 11 after the jury informed her they could not come up with a unanimous verdict following three days of deliberations.

Jury foreman Ray Davilla said he was one of three jurors who favored convicting Sandy and Perez in the killing of homeless camper James Boyd. He said he thinks the state should retry the two, but he added that it was a difficult issue for the jury.

“It was upsetting to us that we were judging officers based on a few seconds [of their actions and video]” Davilla said. He added that he and other jurors felt that Boyd was attempting to surrender when he was shot.

Davilla also said that jurors thought “it was a poor plan on the part of the officers who created the plan” to subdue Boyd with non-lethal, and then, lethal force.

Jurors reviewed the video recording of the shooting “dozens of times” and based their decisions on the facts, not their emotions, Davilla said.

Special prosecutor Randi McGinn said the decision on whether to retry Sandy and Perez will most likely rest with the new district attorney, Raul Torrez, a Democrat who is running unopposed in the Nov. 8 general election.

McGinn said she had no problem with the hung jury, nor with the fact that nine jurors voted to acquit both defendants.

“This case was really, really hard, and I hope it starts a conversation about where we want the line to be drawn in regard to police shootings,” McGinn said. “I’m hoping that we reject ‘Dirty Harry’ and go back to having peace officers.”

McGinn’s office was paid $5,400 to litigate both last summer’s preliminary hearing and the just-finished trial after Bernalillo County District Attorney Kari Brandenburg was disqualified by another judge because of the appearance of a conflict of interest.

“We did this to restore confidence in the criminal justice system,” McGinn said. “As I told the jury, there should be no one above the law, not police officers, and no one is beneath its protection, not even homeless, mentally ill campers.”

Sandy and Perez were originally charged with an open count of murder in the March 16, 2014, death of Boyd, a mentally ill man camping illegally in the Sandia foothills, after an hours-long police standoff. Hadfield eventually narrowed the charges to second-degree murder, which carries a maximum sentence of 15 years in prison.

A similar division among jurors led to a hung jury last December in the trial of Baltimore Police Officer William Porter, one of six officers charged in the April 2015 death of a Baltimore man, Freddie Gray. Gray suffered a broken neck likely caused during a purposefully rough ride in a police van after his arrest. After Porter’s hung jury and the acquittal of another officer, all charges against the remaining five Baltimore officers were dropped.

Shortly after the Boyd killing, the U.S. Department of Justice concluded that APD had engaged in a pattern of unconstitutional use of force. Between 2010 and the spring of 2014, APD shot 40 people – some of them unarmed – killing 26 of them. Most were minorities.

“APD leadership and the administration support and appreciate the difficult work and challenges our officers face each and every day. We strive to serve the community with honor, courage and commitment always,” Huntsman said. “Closure is important for our department and our community to move forward and we hope it comes soon.”

APD Forward, a coalition of lawyers and activists that organized to monitor APD’s efforts to reform itself, reacted to the mistrial.

“This trial underscores the need for accountability in the Albuquerque Police Department and police departments across the country. The killing of James Boyd was clearly unjustified. Even if officers weren’t convicted of criminal charges, their actions escalated a situation that could have ended peacefully. It bears remembering that Mr. Boyd’s only crime was illegal camping in an open space, and for that, he died,” the group said in a statement.

“APD Forward calls upon Mayor Berry and APD Chief Eden to renew their efforts towards achieving full compliance with the reforms mandated by the Department of Justice consent decree. In light of the independent federal monitor’s recent special report, it is clear that APD still has a long way to go before it has the proper use of force policies and systems of accountability. Until then, our community remains at risk of losing more James Boyds to preventable police violence,” the group said.